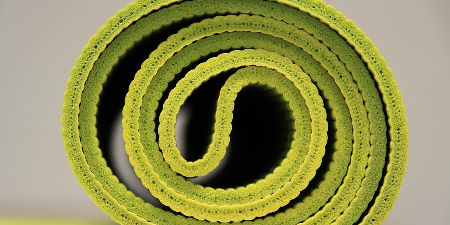 If you are thinking about buying any of the yoga mats listed here, STOP! The mats listed here have terrible reviews. We’ll point you to better alternatives at the bottom of this article.

The Aurorae Yoga Mat has many critical reviews that you can verify on Amazon by clicking the link or image above. The main complaint by far is the slipperiness. There are complaints even for basic down dog poses. The mat is extremely slippery even if you are not sweaty. They include a rosin/resin bag for powdering your hand, similar to what gymnasts due. However, this is bizarre – no one does that for yoga! Just buy yourself a proper yoga mat.

The second most common complaint about the Aurorae Yoga Mat is the poor durability. The mat starts to fall apart after 6 months for some users. For others, it falls apart on the first or second use! If your feet get damp and stick to the cheap material, when you lift your foot, there is a chance a piece of the mat may come off. Don’t believe us? Read the Aurorae Yoga Mat reviews on Amazon yourself at the link above.

Right off the bat, we would not recommend the Sivan Yoga Mat because it is 1/2″ thick, much too thick for yoga. A yoga mat that is too thick will make poses unstable and difficult, not to mention put you at risk for wrist pain. That said, the greatest complaint by users of the Sivan Yoga Mat is its poor quality. Many users complain that the Sivan Yoga Mat tears or even rips in half during light use with basic poses. It can tear on its first use, as others report, so it’s not an issue of getting old. The quality of the Sivan Yoga Mat is simply quite poor. Even if the mat doesn’t tear, it is very stretchy, which is annoying when trying to hold a stable pose. Combined with the extra thickness, you will have a very frustrating yoga experience.

If the Fit Spirit Yoga Mat looked nice, maybe (probably not) you could put up with the bad smell. However, the actual prints are poor quality in that the designs are not properly transferred. The prints also start to come off and are not durable. This makes you wonder if the chemical-stamped PVC Fit Spirit Yoga Mat is actually a health risk or not…

The Spoga Yoga Mat is poorly made and poorly delivered product. That’s right. The poor user experience starts right from delivery! When you receive the Spoga Yoga Mat, it is wrapped in very sticky adhesive tape. The problems it that the mat material is very cheap. When you remove the packaging tape, chunks of the mat rip right out! Other users report that the mat comes with dents, deformations, and rips. The Spoga Yoga Mat doesn’t hold up under regular use either and falls apart readily.

As you might expect, there some complaints about this mat being too slippery. Other complain that the Spoga Yoga Mat is too soft and does not provide stable support for yoga poses. All in all, you are much better of with a different yoga mat, even for the same price.

The Yes4All Yoga Mat is another cheap, low quality mat with a slippery surface and poor durability. However, there are some other problems specific to the Yes4All Yoga Mat. The mat is supposed to be extra thick at 1/2″. Again, we do not recommend such a thick mat. However, if you were looking for an extra thick mat for cushioning, you would be disappointed anyways. The cheap foam gets compressed in less than a few months. It then becomes flat and hard, and there’s not point in getting the extra thick mat in the first place.

The Yes4All Yoga Mat also advertises incorrectly and claims it will come with a strap for carrying. Many users report that there is no yoga strap. If you are buying the Yes4All Yoga Mat, you are probably on a budget. It’s base price is about $20, but if you have to pay $5-10 for a strap, it’s real price is $25-30, which is quite expensive for what you are getting.

Finally, the cheap material in the Yes4All Yoga Mat is noisy. During poses, the mat will squeak and make sounds. This is annoying when you are by yourself, and embarrassing when you are in a group yoga class. Stay away from this mat!

The main complaint for the 1/2″ Reehut Yoga Mat is its poor stability. Most people buying the extra thick 1/2″ yoga mats are probably beginners who do not understand yoga mat requirements. Beginners mistakenly think that the 1/2″ mat will be more comfortable. However, the extra thickness makes it hard to balance. The Reehut Yoga Mat also has the problem of stretching and slipping. These all contribute to a poor yoga experience for a beginner.

A number of people have reported ordering a new Reehut Yoga Mat and receiving a torn version. The cheap material is less durable and also quite noisy, similar to the other problematic mats we described previously.

Jiva Yoga Mat reviews indicate problems with grip. In fact, at least three users have all reported that the Jiva Yoga Mat slips against the floor. This is incredibly dangerous – imagine trying a difficult pose and having your mat slip out from under you. Even from a short distance, you can get a sprain, bruise, or other injury. Also, usually people complain about slippery mats under sweaty conditions. You can fix this by using a yoga towel or avoiding hot yoga classes. You CANNOT fix the Jiva Yoga Mat if it slips on the floor. There are also some complaints about durability and quality of the Jiva Yoga Mat, but its poor floor grip is our biggest concern.

Given the higher price tag of the Gaiam Yoga Mat, you will be extra upset when you find this out. Some people ignored all the negative Amazon reviews because Gaiam is a well-known yoga company. They too sadly reported the same problems with slipperiness. Avoid the printed Gaiam Yoga Mat.

The BalanceFrom GoYoga Yoga Mat will is selling well on Amazon, which is unfortunate. If people would read the reviews in advance, they would avoid the massive disappointment taking place right now. The BalanceFrom GoYoga Yoga Mat is, first of all, too thick and mushy to support yoga poses. Even if the mat were durable, you would not be able to use it properly for yoga.

Read our main yoga mat reviews guide for how to pick a great yoga mat at budget and premium price points. If you just want to get started right away, we recommend the low-cost Clever Yoga Better Grip, available from Amazon by clicking the link or image below.

2 thoughts on “Review of 10 Worst Yoga Mats to Avoid”

We're here to help you on your yoga journey. Find out more about us and our own yoga journeys on our biography page. Learn how you can support our efforts through our affiliate links.